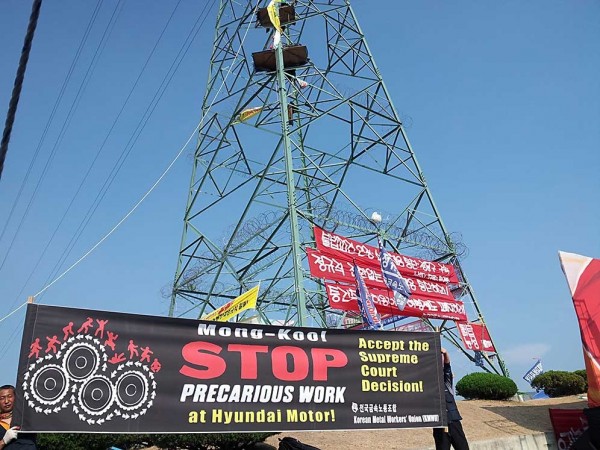 The precarious workers have been carrying out strikes at Hyundai Motor in Korea and protest actions, symbolized by the aerial protest of successful supreme court case plaintiff CHOI and the general secretary of the KMWU Hyundai Motor Ulsan Irregular Workers’ Local, CHUN, Ui-bong. The two have been occupying a 50 meter high, 154,000 volt electricity transmission tower in minus 25 degrees celcius weather since 17 October 2012 in an aerial protest to call on Hyundai Motor to regularize the precarious workers’ status to regular, fulltime workers.

Please sign the petition to ask the White House to take a stand on Hyundai Motor Chairman CHUNG, Mong-Koo’s non-compliance with the Supreme Court precarious workers’ ruling. If we can achieve 25,000 petitions between 10 January 2013 and 8 February 2013, the Obama administration will need to take a stand on this crucial struggle of precarious workers to seek accountability from the transnational corporations using illegal work arrangements to circumvent responsibility for their employees.

Not familiar with signing White House petitions? Click the link below for the “How to” pdf, and follow the instructions~

Thank you for your concern!